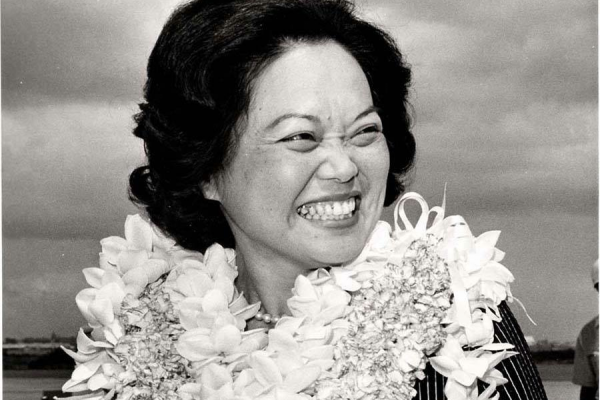 Patsy Takemoto Mink (1927-2002), the first woman of color elected to the U.S. Congress, is best known for her legislative work on women, labor and education, especially the Title IX of the 1972 Education Amendments. Patsy Mink also had a long history of protesting nuclear testing in the Pacific. A third generation Japanese American lawyer in Hawaii, Mink began her legal and political career defending pacifist activists on the Phoenix, a private boat that attempted to sail into a nuclear testing zone in 1958 to protest detonations in the Pacific Islands. After the 1963 Limited Test Ban Treaty prevented above ground testing, Mink persisted in her anti-nuclear activism against underground testing. As a member of the U.S. House of Representatives, she was a key critic of the Cannikin test, which detonated a 5-megaton weapon with 400 times the power of the Hiroshima bomb on Amchitka Island, Alaska. Because the testing site was located in one of the most seismically active regions of the world, the detonation had the potential to generate a tsunami that could devastate islands throughout the Pacific, including Japan and Hawaii. Wu's presentation examines how Mink navigated complex global, national, and local relationships and positionalities to protest environmental and biological destruction.

Judy Tzu-Chun Wu is Professor and Chair of Asian American Studies at the University of California, Irvine. She previously was a faculty member at Ohio State University. She authored Dr. Mom Chung of the Fair-Haired Bastards: The Life of Wartime Celebrity (California 2005) and Radicals on the Road: Internationalism, Orientalism, and Feminism during the Viet Nam Era (Cornell 2013). She co-edits Frontiers: a Journal of Women’s Studies; Women’s America: Refocusing the Past (Oxford 2015); and the Brill book series, “Gendering the Trans-Pacific World: Diaspora, Empire, and Race.” She is working with Gwendolyn Mink on a political biography of Patsy Takemoto Mink.

This lecture is made possible by Program in Asian American Studies and by Brad Richardson Memorial Fund at Institute for Japanese Studies.